The Bachelors #2: The Large Man 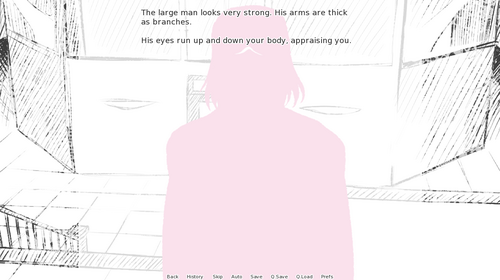 Please mind the Patriah content warnings when reading this post: Patriah contains depictions of physical and sexual violence against women. Above all, be safe.

Bachelor #2 in Patriah is referred to as "The Large Man" upon first meeting the protagonist. His name is Paul.

Who is Paul? Where did he come from? What does he do for a living? These are details that are difficult to get out of Paul. He's a huge man, and the eldest of the bachelors. One thing is certain: he is not thinking about the long-term. Marriage is not his goal. His goal is sex: carnal pleasure and instant gratification.

Paul is based on morally ambiguous bad boys like Mink from Dramatical Murder and Robert from Dream Daddy. They're the kind of men who have more going on than is immediately apparent. They have personal goals and needs and will do what it takes to fulfill them. Paul, on the other hand, seems pretty shallow. He wants your body and, given the opportunity, he will take it.

In spite of Paul's aggression about his desires, Paul is inherently aware of the system that has brought him where he is, and the penalties he will suffer if he steps out of line. Where Joshua respects the game and the rules, Paul plays by them begrudgingly and would love to reject them as soon as possible. He is eager for Patriah to fail to play by the rules, so he can take advantage of the situation. Responding passively to his advances may seem safer, if you can endure him, but nothing will stop him (and enrage him) as effectively as polite refusal.

Paul is physically intimidating, and dwarfs Patriah. Compared to him, she looks (and feels) very small and fragile. The threat of physical violence by Paul is very present. He's the kind of man who might remind women that turning someone down may lead to murder, and avoidance might be the correct response.

Be Careful, but be Kind.